Home » Sports Diplomacy: Like Chicken Soup for the Soul 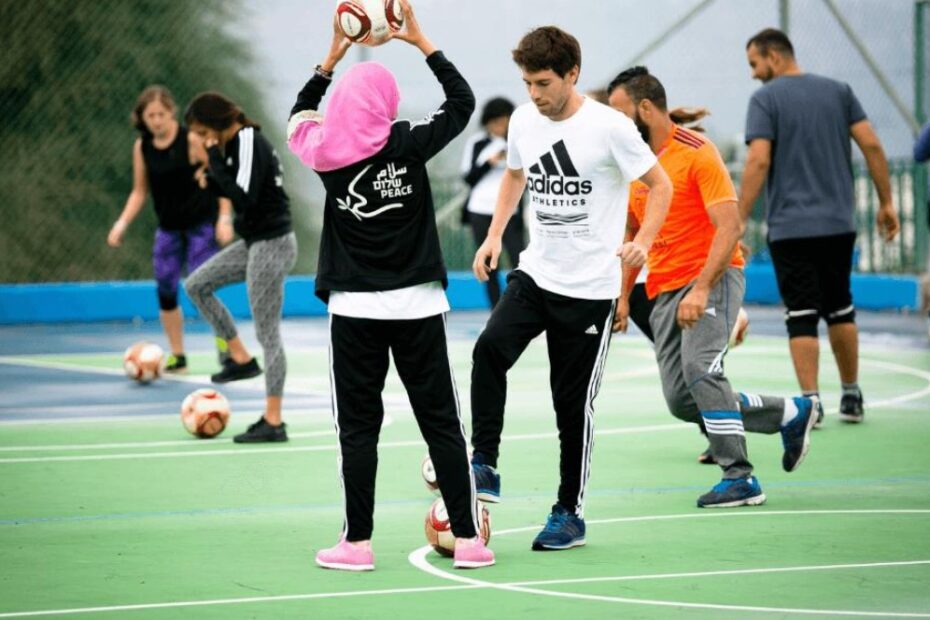 So, why are sports so effective in diplomatic efforts? Because sports tend to warm the heart and sooth the soul. For the most part, sports create good feelings when we watch and play them, so long as we do not allow the negative and more passionate sides to get the better of us. Yes, some passion is good and productive, of course; however, the passion in sports that leads to anger and occasional violence is obviously not beneficial. Still, something that we have found in our many years of sports related diplomacy is this: In and among younger populations, sports can lead to greater cooperation, affection, and camaraderie—even when there are numerous other barriers in the way. Younger people need something to “grasp on to.” They need a conduit and a way to establish better and more effective relationships; to develop positive sentiments towards others; to transcend the limitations of racism, hatred, and bigotry. Being on the “same field of play at the same time” can often help to dispel myths, and it can also open the way for better understanding in and among people of vastly different backgrounds, ethnicities, and religions. Ultimately, respect becomes a key feature of all of this. So, we are always careful and attentive to incorporate respect as a key component and a key element in our projects. In essence and in practice, that means promoting and advocating respect for others, respect for oneself, respect for our surroundings, and self-respect. I remember back a few years back when we did some sports programming in Jerusalem, Damascus, and Amman. In all of these circumstances, we had some dramatic challenges in front of us. In fact, we were in Syria just prior to the eruption of the violent and extensive civil war there. At that time, we were speaking about and advocating for an “International Youth Soccer Tournament for Peace” to be held in the city of Aleppo. But our plans were sidetracked by attacks that ensued shortly thereafter. By the same token, though, I would like to believe that we were able to spread at least a bit of goodwill while were there with the proverbial “boots on the ground” in Syria, trying to spread peace and understanding through game of soccer.

Likewise, when we (my team and I) were in the Holy Land, we worked closely with the Shimon Peres Center for Peace, along with his so-called “Peace Team” at the time. That youth soccer team and youth soccer development center in Jerusalem featured both Israeli Palestinian youth and Israeli Jewish children on the same team, on the same field, and at the same time. I watched in awe as two coaches— one an Israeli Palestinian and the other an Israeli Jewish (former semi-pro and pro soccer players)—instruct those budding soccer players in both Arabic and Hebrew. It was an amazing sight to see and witness. It was a testament to that which is possible in our often-divided world. Today, that same entity in Jerusalem is referred to as the “Peres Center for Peace and Innovation.” See this link for more: https://www.peres-center.org/en/theorganization/projects/sports/ Recently, I have also seen, written about, and covered developments by Prince Albert of Monaco who has taken up this most auspicious, impressive, and formidable cause. He is truly an advocate for peace through youth sports (as well as in and through higher level sports as well). Other great former soccer stars such as Zidane are doing a lot to promote an overall environment of “football peace,” too. Even UNICEF and USAID have sports-related diplomatic projects, as does the U.S. Department of State. My suggestion is that we embrace these initiatives and expand upon them as quickly as we can. Why? Because, occasionally, where other more conventional methods and modes of diplomacy fail, perhaps sports can fill the void. Why else? Because the world is in need. The quicker we move and the quicker we mobilize, the better it is. We can probably do our small part in helping to save lives, empower youth, and change the course and direction of our planet—again, at least to some small degree. We can also take “at risk youth” and help to change their mindset, away from violence and toward cooperation and collaboration instead. Prince Albert of Monaco Promoting Peace through Sports. Additionally, I have seen the rise of soccer peace efforts in the north African country of Morocco. There, too, “soccer peace” is taking center stage.

And of course, even the great former footballer turned President of Liberia, George Weah, has served in a similar capacity to promote “soccer peace” (or “football peace”) in and throughout much of the African continent. George Weah with UNICEF. Not that long ago, I was also in Qatar promoting sports diplomacy. It is truly incredible to understand the great strides that the Qataris have made toward “football peace,” especially as they get ready to host the FIFA World Cup there later this year—Qatar 2022.

Qatars-delegation-to-UN-holds-seminar-onfootball-and-peaceIn fact, and in light of that, The Guardian reported on this recently: Qatar’s delegation to UN holds seminar on football and peace The permanent delegation of Qatar to the United Nations, the permanent delegation of the United States of America, the United Nations Office of Counterterrorism and the Football for Peace Organization organized a virtual symposium in New York on football and peace. Under the title ‘Football for Peace, Unlocking the Power of Football’, the participants in the symposium sought to focus on the important partnership established by Qatar to prevent and combat violent extremism and terrorism.

There is still much work to be done to achieve peace, and we all know that. But we can continue these efforts in a more pronounced manner to support and sustain these initiatives around the globe. They will invariably pay dividends for so many members of the human family. * * * * *Most certainly, soccer is not the only sport that can be used either. In some countries it would be cricket or rugby or even ice hockey (as in northern and central Europe). In others, it might be martial arts and table tennis. Nonetheless, the possibilities for “peace through sports” are endless indeed. All in all, we have an opportunity to continue to spread peace through sports. No, sports are not the only tool, and sports is not the only answer. We can use a wide variety of elements and components including, but not limited to, the following as well: education, space, technology, culture, music, dance and so on. But sports tend to be somewhat of a universal language, much like music. I am convinced that if we all contribute to these causes, we can truly make this world a better place. Yes, it is hopeful and idealistic, but it is certainly worth the dream. God bless you.