Home » Qatar 2022: A True Opportunity for Peace through Soccer

Qatar 2022: A True Opportunity for Peace through Soccer 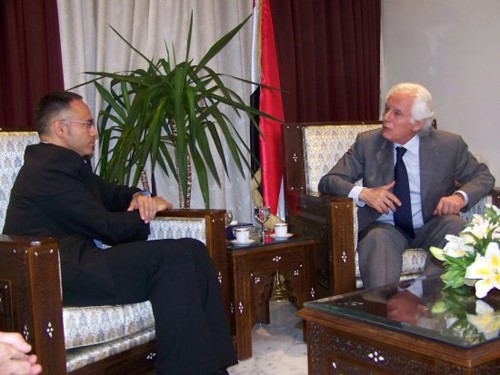 It seems that time flies. In my mind, it was as if they announced the playing of the FIFA World Cup in Qatar just yesterday. Of course, the time is quickly approaching when the nations of the world will converge upon this small Gulf state to participate in what is arguably the most watched sporting event on the global stage. And of course, as God would have it, Qatar is located in the Persian/Arabian Gulf, just miles from Iran, Saudi Arabia and Iraq. The irony is palpable, yet the opportunity is that much greater to demonstrate what can truly be done through a sport that transcends so many boundaries, ethnicities, races and religions.

In 2007 I was invited on a mission of “peace through soccer” in Syria. I had been on similar missions in Jordan, Abu Dhabi and Jerusalem, but this one seemed most pronounced. I landed in Damascus shortly after the departure of Congresswoman Nancy Pelosi. Hopes for peace were high, but the underlying tension in the region was percolating and profound. Even though many wanted and desired peace in theMENA Region and beyond, the hatred somehow overtook the optimism. Within months after my journey to Damascus, civil war began to fester in the age-old territory often referred to in Arabic as “Sham,” equated to “heaven and sky.” But while an environment of “heavenly sky” was desired by many, it instead began to rain down mortar bombs and shells.

It was not just sad, but an absolute tragedy, especially when considering the strategic and historic importance of Damascus. It is one of the oldest, if not the oldest, continuously inhabited cities in the world. It is also at the heart of Western Civilization.

Today, we can learn from the past. We can seize the opportunity in Qatar to usher in a new beginning – one of peace and harmony. For notwithstanding our differences in the world, we can still find relevant and significant ways in which to cooperate and work toward a lasting peace. One of the tools considered most useful is that of soccer (football in the UK, futbol in Latin America, and so on). Indeed, this sport with humble roots and beginnings, one that can be played on just about any sandlot around the world, can also prove to be a tremendous unifying force. Soccer has, what I call, the true “force of the transcendent.” In and of itself, the sport has no power. But the people that play it, watch it and like it understand the meaning. It has the ability to unite – even if for short periods of time – because it allows people to look past their differences and focus on something that brings joy, cooperation, camaraderie, and a deeper awareness of humanity.

So, it would seem that the human condition is enhanced and fed through a peace tool such as soccer. It is obviously not the answer to the world’s problems – for that answer is much greater and much more complex on so many levels – but it does represent one path that we can pursue to get many to sit down at the same table, break bread (good bread) and discuss peace (or at least get many to assemble on the same field of play to share their love for the game). Using soccer as a peace tool in Qatar and in the Region to prepare for World Cup 2022 is probably a wise choice. If for nothing else, then it can be utilized to spread goodwill and to let citizens of the world know, see, and understand that a degree of peace and cooperation is indeed possible.

The author, Antonio J. Soave, is the Founder and Chairman of the Global Foundation for Peace through Soccer. He has played and coached the game for nearly 50 years. His foundation can be found on Facebook and at GoFundMe.