Home » For Younger Athletes, Keep in Mind the Late Bloomer

For Younger Athletes, Keep in Mind the Late Bloomer 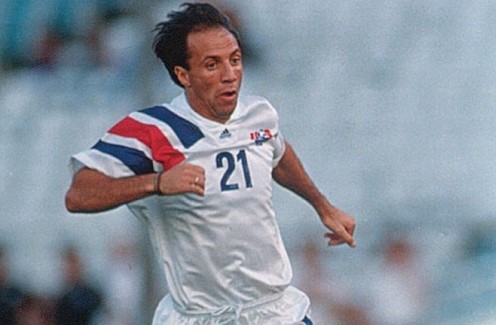 Mercy, Compassion, Fun & Hard Work: All Part of an
Important Equation
Look to Fernando Clavijo for Advice
And: From Michael Jordan to Tom Brady and
Beyond

I have been playing and coaching sports for a very long time: from college and semi-pro soccer, all the way to recreational flag football and hockey. I have coached at the Disney’s Wide World of Sports, just as I have coached at the university level. Today, I still coach specialized soccer clinics internationally as part of my non-profit foundation, the Global Foundation for Peace through Soccer. All in all, I have seen a lot, and I have been through a lot. On observation that concerns me the most, however, is the lack of understanding—and compassion—at the youth level of sports. By all means, be sure that youth players are having fun. For when they have fun, they tend to learn the most, listen the most, and respond the best. We often forget that even some of the most exceptional athletes in history were “slow starters” and “late bloomers.” By that I mean world-class professionals such as Michael Jordan and Tom Brady. As many know, Jordan was once cut from his high school basketball team. Likewise, Brady was hardly a top pick when he appeared as a QB in his senior year for the University of Michigan. Of course, both went on to become exceptional and extraordinary role models in sports. Regarding Brady, there is this excerpt from Ripley’s: Brady started his high school career as the third-sting quarterback of a losing freshman team, spending more time practicing defense than leading the pack, running linebacker drills for a chance to play. During his sophomore year, he finally got a chance to play QB and proved—not for the last time—that all he needed was a chance, leading the game-winning drive in his first game.

Ripleys.com goes on to say this as well:
TOM BRADY WAS A SIXTH-ROUND DRAFT PICK, AFTER 198 OTHER PLAYERS

Yep: From third string to first string in high school, then from part-time QB at Michigan to star QB in the NFL—and en-route to the NFL Hall of Fame (as we all know). What about Jordan? Let’s turn to SportsCaster: Yes, Jordan was technically cut. But the truth is more complicated. [He actually ended upon the junior varsity team that year.]So Jordan did what any bummed teenager would do. He went home, locked himself in his room, and cried. Unlike most teens, the demotion to the junior varsity squad made him more determined to hone his skills so he’d be a shoo-in for the varsity next year. Source: https://www.sportscasting.com/wasmichael-jordan-really-cut-from-his-high-schoolbasketball-team/

Of course, the rest is history, as the whole world of sports would acknowledge. And there’s Kurt Warner. This is an excerpt from BleacherReport:Who could believe that a coach named Dick Vermeil, who had been entirely out of football for 15 years, would lead the NFL’s worst team of the 1990s to a Super Bowl win? Or that a QB named Kurt Warner, who had been working in a grocery store after his college football days before playing in the AFL, would become the MVP of both the league and the Super Bowl in just his first year as a starter? Source: https://bleacherreport.com/articles/444074- cinderella-men-the-10-greatest-fairytale-seasonsin-nfl-history

How implausible is it for a professional football player to go from working in a grocery store to an MVP quarterback inthe Super Bowl? I don’t know the odds, but I would say that the possibility of doing so would be very, very remote. And it’s not just America that likes “Cinderella Stories,” but the whole world (for the most part, at least). The underdog tends to win the hearts of so many, whether those are players or coaches (like Dick Vermeil). The good Lord lets us all know that it is “never really over until it is actually and completely over.” Then comes one of my favorite stories of all time: that of the former World Cup soccer player, Fernando Clavijo. I had the unbelievable pleasure of being able to interview Fernando on television when he coached the Colorado Rapids. I was later able to spend a few weeks with him while we accompanied FC Dallas to Abu Dhabi for preseason training. Fernando was as kind as the day was long. He was an exceptional human being. Here is just a short idea of his famed story: An immigrant to this land, he [Fernando Clavijo] rode that dream – soared on it, really – to grand places. He rode to the very tip-top for almost every professional soccer dreamer, into a World Cup. Later he rode that dream to a career in management and administration as well as the National Soccer Hall of Fame. “One day playing soccer with an Italian team at a park in New Jersey, these other Italian guys came and asked him his name,” she said. “That was the beginning of a chain of events, because that Italian knew another Italian who knew another Italian and that other Italian had a soccer team. And that’s how it all unfolded. Just from someone that saw him in a park in New Jersey.”One thing led to another and Clavijo eventually made good use of a tryout for the New York Apollos of the American Soccer League. Indoor soccer was catching on through the 1980s, so Clavijo’s second stop was the New York Arrows of the thriving Major Indoor Soccer League. Clavijo excelled as a defender, helping the Arrows and, later, the powerful San Diego Sockers claim four MISL championships in six seasons. All of that helped him gain notice from U.S. national team coach Bora Milutinovic, the Serbian tactician who was charged in 1991 with cobbling together a team that could adequately represent the American game during the 1994 World Cup. Source: https://www.ussoccer.com/stories/2019/02/rem embering-fernando-clavijo My heart still sinks when I think that Fernando is no longer with us physically. Having known him a bit, though, I would like to believe that he is somewhere in heaven with the Good Lord. If Fernando taught me anything, it was kindness (followed by patience). He had an innate goodness that was—and still is—hard to find in professional sports. He possessed an unparalleled and innate humility, also quite rare. But, if my memory serves me, he also seemed to encourage fun and enjoyment in sports. When I asked him about going from a “sandlot soccer player” in New Jersey to becoming a World Cup standout, he just nodded and said: ‘Well, sometimes God has other plans. Sometimes He (God) discovers us wherever we are.

On top of it, Fernando was 38 years old when he appeared for the U.S. World Cup team in 1994. It took him a while, but he got there, and he took the soccer world in the U.S. by storm (at that time, at least). After all of this, perhaps I have one kind word of advice: Coaches, administrators, and parents, please let the kids have fun. Please provide them with encouragement. Please show compassion and mercy. Some will be unlikely stars; others may be late bloomers and slow starters. It takes time, understanding, and patience—as showcased and evidenced by Fernando Clavijo. No, you do not need to give each child a medal; that’s not the point at all. But we should all assist in boosting each child’s self-esteem, because that encouragement could last for a lifetime—whether it leads to professional sports or not. God bless you.